With the outbreak of the First World War, many men signed up to serve their country, either voluntarily or because they were called up by the military. Local authorities were affected by this as much as any other field of work. Naturally those who had stayed behind and continued to work with the local authorities were keen to find out how those who were at the Front were getting on.

Good news came from the Front in the form of awards bestowed on soldiers for their actions in combat. In September 1915, Gelligaer Urban District Council noted that James Green had been recommended for a Distinguished Conduct Medal. In December 1917 Private Tudor Lewis received the Military Medal. And on New Year’s Day 1918, it was announced that Sergeant Ivor Jones had won both the Distinguished Conduct and Military Medals.

Several other employees were recognised for their distinguished service and bravery.

In June 1917 Bridgend Urban District Council passed on their congratulations to the parents of Oscar Powell and Frank Howells who had both received the Military Medal. In December of that year Second Lieutenant Steve Jenkins, son of one of the council members was also awarded the Military Medal. In January of 1918 Ogmore and Garw Urban District Council reported that Mr King, a former Captain of the Nantymoel fire brigade had received the Distinguished Conduct Medal.

At the end of the War in November 1918, Aberdare Urban District Council revealed that Major R D Williams, the son of a councillor, had won the Distinguished Service Order.

Another source of good news would be when servicemen were promoted. In June 1916 Bridgend Urban District Council congratulated Lieutenant Colonel F W Smith on his promotion to the Command of the 16th Welsh (Cardiff City) Battalion. In May 1917 Gelligaer Urban District Council reported on the rapid rise of Mr Emlyn Evans. Starting as a Private in September of 1915, he became a Lance Corporal in November of that year, then a full Corporal a month later. Six months after that he became a Sergeant before becoming a Company Sergeant Major in December of 1916. The following month he transferred to the Royal Flying Corps and became a Flight Sergeant and then in April of 1917 he became a Sergeant Major.

Along with the joy of hearing of colleagues receiving awards for valour, there was also the despair of hearing the news of the death or wounding of those serving at the Front. In September 1914 the Earl and Countess of Plymouth lost a relative, Archer Windsor Clive. Several local authorities voted to pass their condolences, which were followed up by replies of thanks in kind from the Plymouth Estate.

In November 1916 Dr M J Rees, who had been for many years the medical officer of health for Aberdare Rural District Council, was reported killed in action. In July of 1917 three former employees, Motorman Amos, Motorman E Wiltshire and Conductor AC Sims, were killed in action.

Not all losses occurred at what most people would view as the ‘Front’, namely France and Belgium. Some of the above losses may have occurred in other parts of the world. The Gallipoli campaign of 1915 saw British Empire troops serving in modern day Turkey, while several campaigns took place in both Africa and the Middle East. It is also worth noting that not all losses occurred on the ground. There were those who served in the air with the Royal Flying Corps (later Royal Air Force) and Royal Naval Air Service (later Fleet Air Arm), and there were those who served with either the Marines or the Navy. One loss at sea was in October of 1914 when Gelligaer Urban District Council reported the death of Lieutenant Commander McGregor when HMS Hawke was sunk by a German U boat in October of 1914.

The local authority minutes at Glamorgan Archives show us that news from the front was highly sought after by councillors and employees. Although good reports were hoped for sadly it was often bad news that was received.

The 75th deposit for the year 2009 was a series of photographs, postcards, programmes and newsletters relating to events in Maesteg and other areas. The material itself dates from around 1900 to 2012 and the diversity of the subject matter means it will be of great interest to many, especially those exploring the social history of the Llynfi Valley.

The postcards of Maesteg itself include views of St Michael’s and St David’s churches, Bethania chapel, the town hall, the war memorial and council chambers, the general hospital, the park, the railway station, the market place, Garth Colliery, plus general street scenes and views. These postcards date from 1900-1950 reflecting just how much the town had changed in such a short period of time. An ‘Official Guide’ to Maesteg from 1948 is also included in the collection. 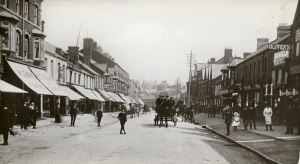 Those who enjoy the history of sport may well be interested in several of the items. There are programmes for rugby matches between Maesteg RFC and local rivals Bridgend which were played during the 1960’s. There’s also a programme from the ‘Welsh Games’ in 1962.

Other notable items included amongst this material are a photograph of VE Day celebrations in Maesteg and a photograph of Queen Mary visiting a local mining family in 1938.

These are archives that could be held by any one of us at home, hidden away at the back of cupboards or in boxes in the attic. Anyone can present material to the Archives, so if you have similar items charting local history then why not contact us to ensure that they’re preserved for the future.

Education records make up a significant proportion of our holdings at Glamorgan Archives. This is reflected in our list of 75th accessions, with 8 of these deposits relating to education. Education records are varied and include school board reports, correspondence and policy documentation; education inspectors notes and correspondence; and the records of individual schools, usually comprising admission registers, log books and photographs.

Education records are some of our most frequently requested items in the searchroom. Their relevance extends well beyond the remit of school buildings and lesson plans. Log books in particular can give an invaluable insight into a community, documenting everything from outbreaks of illness, industrial unrest, local reaction to national events and even the weather.

If you have links to a school which has not deposited records at Glamorgan Archives and are interested in finding out about the process, we would be delighted to hear from you. Schools that deposit records retain ownership of the items. The records will be packaged and stored to prevent their deterioration and ensure their survival for future generations. They can then be accessed in our searchroom. We can also arrange for pupils from your school to be involved with the process of cleaning, packaging and cataloguing the records. It is a great opportunity to learn about what we do and about the importance of preserving our documentary heritage.

School groups are welcome to visit the archives, where we offer a variety of workshops linked to the curriculum. A list of topics can be found on our website, and teachers are welcome to contact us to suggest new themes. All school visits are free of charge. To arrange a visit just contact Glamorgan Archives.