The Canton Coliseum Cinema was designed by local architect, Edwin J. Jones and built by the Canton Cinema Company in 1912.  The approved building plans imply that it would seat 899 downstairs with a further 192 in the gallery, but comments on the Cinema Treasures website suggest that the seating capacity might have been significantly less than this.  Located at 139-143 Cowbridge Road East, on the corner of North Morgan Street, it opened on 6th January 1913, with The Panther’s Prey as its principal feature film.  Around 1930 it was equipped with a RCA sound system and was re-named Coliseum Cinema. 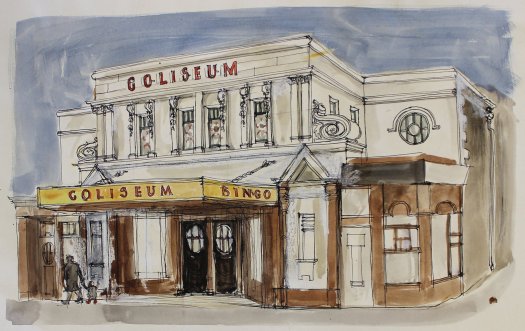 Like many other cinemas, it became a bingo hall in the 1960s.  In the late 1980s it was demolished and the site was subsequently re-developed by Castle Leisure Ltd (part of the business empire established by Solomon Andrews, and still owned by his descendents), who claim that it was ‘the very first purpose-built bingo club in the UK’.