With four games in the ICC Cricket World Cup being staged at Sophia Gardens the focus once again this summer is on cricket. A trawl through the records held at Glamorgan Archives has unearthed an account of a cricket match played over 130 years ago, when a Glamorganshire cricket team took to the field against old rivals from across the River Severn. Played at Cheltenham on 24 September 1890, the match against East Gloucestershire had a dramatic ending with the home team needing to score 34 in the last 15 minutes to secure victory. In an attempt to avert defeat, Glamorgan turned to their captain and opening bowler Hill, supported by Webber, to stem the flow of runs. In the first innings they had formed a deadly partnership sharing 8 wickets. Hill had also opened the batting for Glamorganshire scoring 56, with the newspapers reporting that the openers had …hit out freely and the score rose with great rapidity. However, despite their best efforts, a series of hefty blows from one of the Gloucestershire openers, Champain, who scored 31 in quick time, secured victory for the home side and maintained their unbeaten record for the season.

This was no ordinary cricket match. The Glamorganshire captain was Constance Hill, daughter of Colonel Sir Edward Stock Hill of Rookwood in Cardiff, and it is almost certainly one of the first records of a women’s cricket team being formed and representing Glamorganshire.

The result would have been a significant disappointment. Earlier in the summer, under the guise of Col Hill’s XI, Constance and many of her team, plus Miss Morgan of Ruperra, had travelled to Dedham in Essex and made short work of a side assembled by Sir John Gorst, then Undersecretary of State for India. The newspapers reported that their arrival had created quite a stir:

Colonel Hill and his party travelling from London in a saloon carriage attached to the 10am train from Liverpool Street arrived at Ardleigh about 11.30am. The stoppage of the express and the detraining of the fair athletes and their friends forming evidently quite an event in the annals of that quiet little station.

After bowling out Dedham in their first innings for a low score,Col Hill’s XI made 113:

…Miss Morgan contributed 32 by hard hitting, her innings included a fine hit to square leg for six and three fours; while Miss Hill, who went in first, played steadily and carried her bat for 51 runs.

It must have felt like a good preparation for the Gloucestershire match but, as it turned out, their opponents in September were far more formidable.

Cricket was very fashionable in this period. There are numerous records of matches being played in Wales between mixed teams or Ladies v Gentleman, often with the men batting with broomsticks and only being allowed to bowl and catch with their weaker hand. However, it was also a time when many women saw no reason why they should not participate in what had previously been a male dominated sport. Only 3 months earlier, in June 1890, an exhibition game had been played in Newport staged by the Original English Lady Cricketers. Although a report in the South Wales Daily News that the match had been watched by thousands was probably overstated, there was a genuine interest as the two teams, known as the Reds and Blues, took to the field. The Newport game was one of a series of exhibition matches staged by the Original English Lady Cricketers across England, Wales and Ireland in the summer of 1890. As paid professionals there was no frivolity in the approach taken, with the players employing overarm bowling and those batting equipped with leather and padding to protect against injury. Even so, it was reported that one player left the field that afternoon with a suspected broken nose. There were also inevitably nods to the conventions of the time with the women wearing long skirts to the calf, trimmed with red or blue and weighted with lead shot.

The match was seen as outrageous in some quarters with the suggestion that engaging in such sports was not ‘lady like’. There were heated exchanges in the press as to the extent that the young female body could cope with the strains and stresses of competitive team games such as cricket. In response, the management team pointed out that the players were handpicked for their athletic ability and, given that team members had an average age of 19 years, the party was cared for and chaperoned by a matron and an assistant matron.

Although the Original English Ladies Cricket team soon faded from sight, women’s cricket was taking root. This was particularly the case in the more wealthy sectors of society and it was often promoted, not without some controversy, in colleges and schools for young women. It is a reasonable assumption that Constance Hill and her colleagues in the Glamorganshire team would have attended the Newport match. 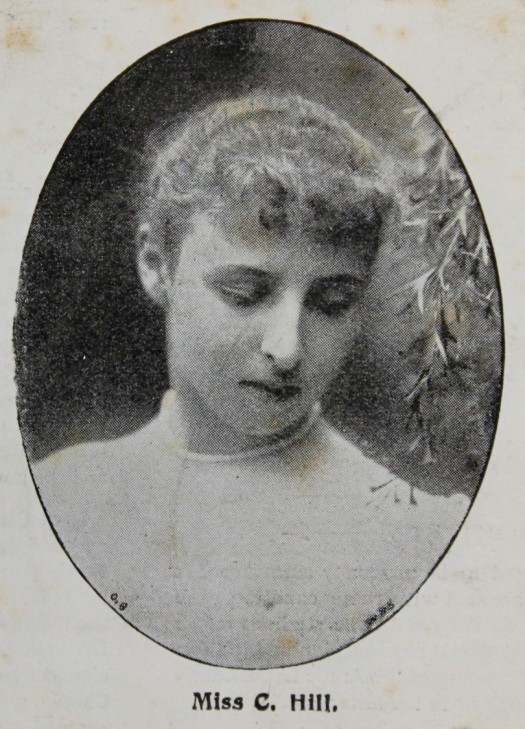 Constance, who was 22 years old at the time, would have had little time for matches involving broomsticks for bats, for the Hills were a cricketing family through and through. Her elder brother, Vernon, played for Winchester and Oxford University and scored a rapid hundred in a varsity game against Cambridge University. He went on to play at county level, for Somerset and Glamorgan, and his brothers, Eustace and Percy, also played county cricket.

The scrapbooks of the Hill family held at Glamorgan Archives chart the cricketing achievements of Col Hill’s sons and daughters and include match reports and several photographs. Although there is no record of Edward Stock Hill’s elder daughter, Mabel, playing cricket, Constance and her younger sister, Gladys were both keen and talented cricketers. The Gloucestershire game would have been played in deadly earnest for the home team was coached by William Woof, who played over 140 games for Gloucestershire, taking over 600 wickets. He coached the Cheltenham College cricket team and in later years the Oxford and Cambridge University sides. A left arm bowler, Woof had been recommended to Cheltenham College by W G Grace. While the Glamorganshire team may not have had such an eminent coach it is very likely that they would have been coached by Colonel Hill and Constance’s brothers and, in particular, Vernon, who in 1890, was already a member of the Somerset county team.

The Hill family and friends at a cricket match

The Hill family scrapbooks provide a fascinating picture of women’s cricket in this period. Cricket matches commenced just after midday and ran through to 6 o’clock with a break of an hour for lunch. Teams dressed in long skirts trimmed with ribbons in the team colours and wearing straw boater hats. Constance was an accomplished cricketer with both the bat and ball and almost invariably opened the batting and bowling. Although not taking the precautions adopted by the Original English Lady Cricketers, she would have worn cricket pads and gloves when batting, although the records suggest that the gloves were often discarded. Constance’s style was to accumulate runs steadily rather than spectacular hitting. However, this was not always the case and in a match at Tredegar Park it was reported that:

Miss Hill and Miss Morgan commenced the second innings for their side. Some splendid batting was now seen both ladies hitting to all parts of the field. In 42 minutes when stumps were drawn the partnership had contributed to 72 runs which included 6 3s by Miss Hill and a 5 by Miss Morgan.

As to bowling, accuracy was the key to her success. In the few records that survive her victims were generally clean bowled. In the one set of bowling statistics during a spell of 6 overs Constance took 3 wickets for 11 runs and, unlike many others, did not record any ‘wides’. It should be noted that this was a fairly short spell in that an innings for an afternoon game might last up to 50 overs. So much for the concerns about the ability of ‘frail young ladies’ to play a competitive cricket match.

Without a formal structure for women’s cricket in South Wales, Constance played for a number of ad hoc teams including Fairwater and a range of invitation teams such as Miss Morgan’s XI. She was also recruited in later years to play for the same Miss Gorst’s XI that had been comprehensively beaten in 1890. While cricket was making in-roads at all levels of society the games reported in South Wales were largely constituted between the daughters and occasionally the wives of a number of wealthy and influential families. This including the Morgans of Ruperra, the Morris’ of Danycraig and a bevy of well-known local families including the Pritchards, Beynons, Curtis’ and Davids.  Their rivals in the Gloucestershire team had included three daughters of Col William Agg, JP, of Prestbury and two daughters of Lt Col Bateman Champain, late of the Royal Engineers who had served in India.

There is a very grand set photographs in the Hill family scrapbooks of the wedding of Constance to Walter Robertson Hoare in 1897 at Llandaff Cathedral. 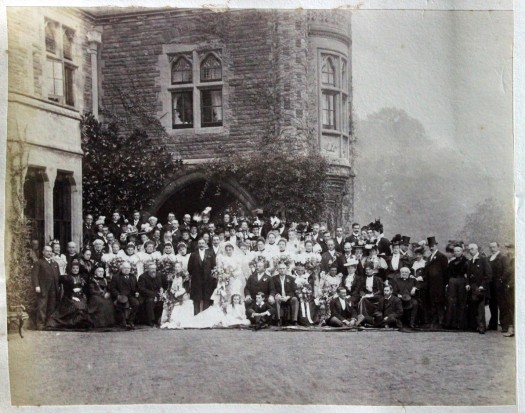 Sadly her marriage also marked the end of the records of her cricket career. It may be that she devoted herself to family and she certainly had other ‘strings in her bow’ as a talented actress, musician and golfer. She was also active in politics, serving as President of one of the Cardiff Branches of the Primrose League.

One hundred and twenty years later another cricketing all-rounder, Heather Knight, lifted the ICC Women’s Cricket World Cup at Lords as England defeated India in the final on 23 July 2017. In 2013 former cricketer, Isabelle Duncan, completed a book on women’s cricket titled ‘Skirting the Boundary’. There is no doubt that Constance and her team would have applauded both, for they had made their contribution to putting women firmly at the wicket and no longer skirting the boundary.

One thought on “Captaining Glamorgan at Cricket, 24 September 1890”